CASE: exclusive offers from Affmy on US with 55% ROI

Hey! Here we are again with a piece of useful information! The hot topic of today’s case is a synergy of Mirelia’s traffic and Affmy’s exclusive dating offers (such as JoinTheDating , MilfNearMe , and LookAWoman ).

We decided to start with CPC, since this payment model has a simpler setup, and you do not need to add creatives and subsequently keep track of how they convert.

To create a campaign, you must select a GEO (in our case, the US, if you wish to promote your dating offers in the US, Mirelia would probably be the best traffic choice you can find) and give the name to the advertising campaign. We are testing mobile traffic, as the vast majority of the audience is using their phones. Our vertical of choice is dating. To get the campaign number, you need to save the campaign, then look at its number in the Campaigns tab (see the screenshot below on the right).

Let's move on to choosing a traffic segment. It should be noted that traffic segments are named as colors - this is the audience, divided by their LTV and loyalty to make a certain action. In the list all segments are in ascending order.
PPS - is a group of users that are interested in similar products and are likely to make a purchase again. Backfill is a remnant traffic.

We started our tests by focusing on the first three groups from the list, namely Brown, Grey, and Green and decided to run them at the minimum CPC rate.

Everything that is highlighted in the screenshot below is necessary, meaning that such information must be included, all the rest is subjected to the needs of the advertiser. The CPC rates were set at Brown - $0.01, Grey - $0.02, and Green - $0.04 accordingly.

At Mirelia Networks, the total budget is not limited, it is calculated as a cap on clicks. Let's set 2,000 clicks for each campaign. After optimization, it will be clear if we need to change this parameter. It would be rather reckless to set the daily and hourly caps yet, since we do not understand how much traffic we will buy out per day at the set rate.
Next, you need to fill in the Domain field, which is a unique name for the campaign group (not a domain name). In this field we need to write any name that has not been used before, for example, dat.com (each campaign must have its own domain field). This is necessary if we want to prevent ourselves from buying the traffic twice. We decided not to set the domain frequency cap and to subsequently set the campaign frequency capping per user on 1, since it is often the optimal indicator when testing the source.

The next step is to set up the time targeting. We assign the time zone - UTC + 03: 00, - to correspond to the tracker’s configuration. During the test, the campaign will work 24 hours, 7 days a week. 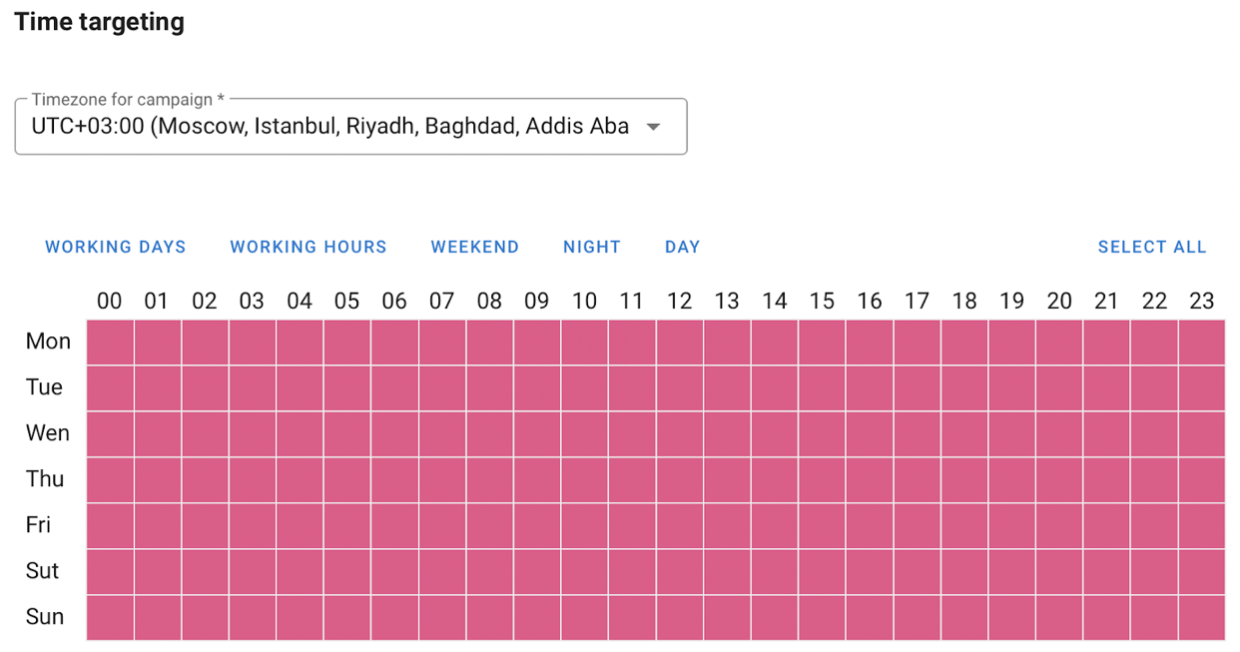 Next step is selecting the pre landing page. Based on our experience with the platform, we recommend testing 5 different pre landing pages for 1 traffic segment to determine the best one. If you wish to conduct A/B testing, you need to evenly distribute the traffic. For that, in each campaign we selected one pre landing page and number 1 in the Traffic distribution section. The first ad campaign will contain number 1, the second - 2, etc. The highest number would be 5. Such distribution will mean that ⅕ of traffic will go for each pre landing page, and the statistics will be more indicative.

Per request, account managers gave us a list of 14 top-performing pre landing pages, where we selected the first 5 for the purposes of our test.
At the end, we had a total of 15 campaigns, 3 traffic segments, for each there are 5 campaigns with different pre landing pages.

The first analysis was conducted 2 days after launching the campaigns. As a result, LookAWoman got the lowest ROI. Another two performed much better, so we decided to stick with them, distributing 50% of the traffic for each.

We also checked the statistics of pre landing pages. We got 2 pages with a negative ROI, switched them off and continued testing the remaining three to determine the leader.

We were also interested to see which pre landing pages performed well in each of the segments. As a result, in the Brown segment, top-2 pre landing pages were 34 and 57, whilst in the Green segment 34, and 37 and in the Gray segment 34 and 57.
Please, note! You can find these campaign settings in the “A/B Split test” block in the “Traffic distribution”. 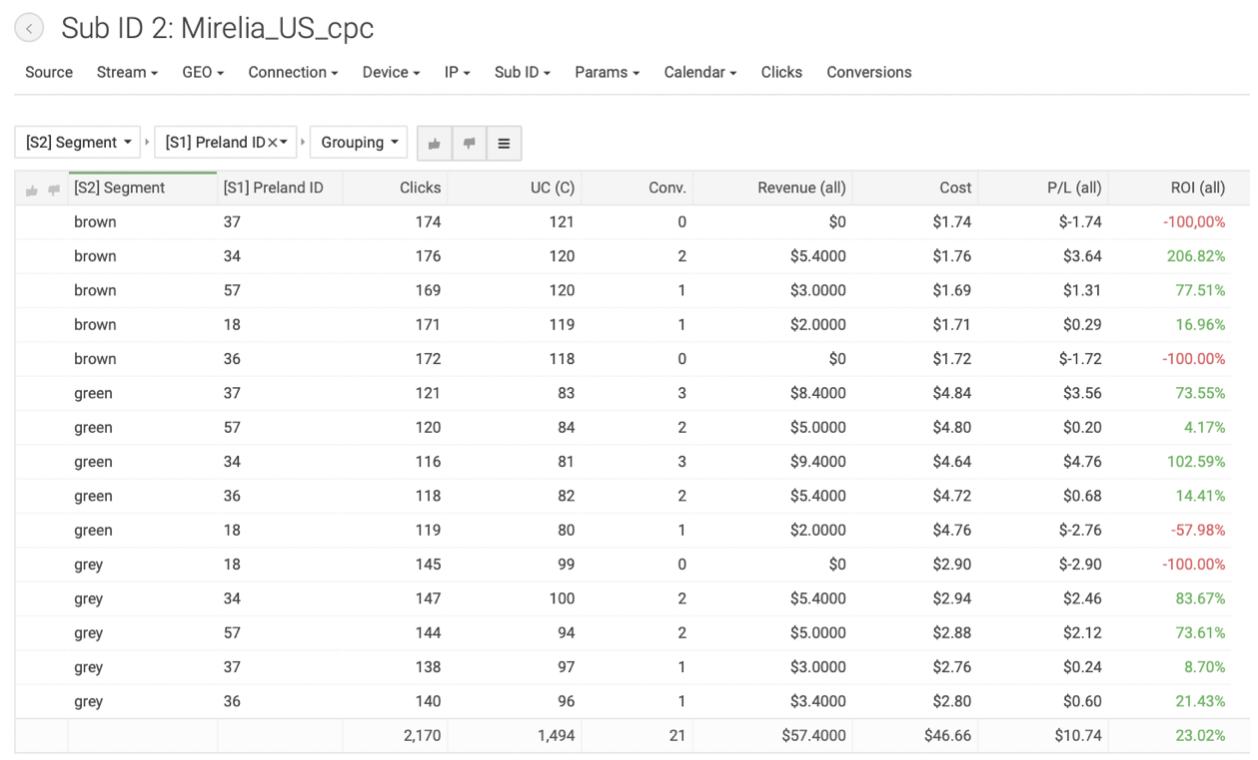 After 4 days, we campaigns once again. As a result, we have received the following:
JoinTheDating - ROI 49,39%;
MilfNearMe - ROI 27,56%.
Following the results, we decided to do another pre landing page optimization to ensure that JoinTheDating performs better.

Once again, the Green segment received the highest ROI of 35.98%.

Among the pre landing pages, number 37 became the leader with the ROI of 86.99%. That is why, in each segment, we leave only one campaign with one pre landing page and in the Traffic distribution section we choose numbers from 1 to 5 so that all traffic goes to campaigns with this pre landing page.
Since we are satisfied with the traffic quality, we will increase the total cap for clicks to 5000 for each remaining campaign.

After running the campaign for a total of 12 days, we got the following results:

The JoinTheDating offer received the highest ROI - 62.51%, which means it performs extremely well and we will be used as our primary offer.

For traffic segments, we got the following results:

Since we were running campaigns with the minimum bid, we can assume that more expensive traffic has better quality.

Analyzing the statistics of our traffic outflow in the Mirelia advertising network, we have drawn certain conclusions.

We can also give general recommendations that would be useful:

We wish you high conversions on all GEOs!